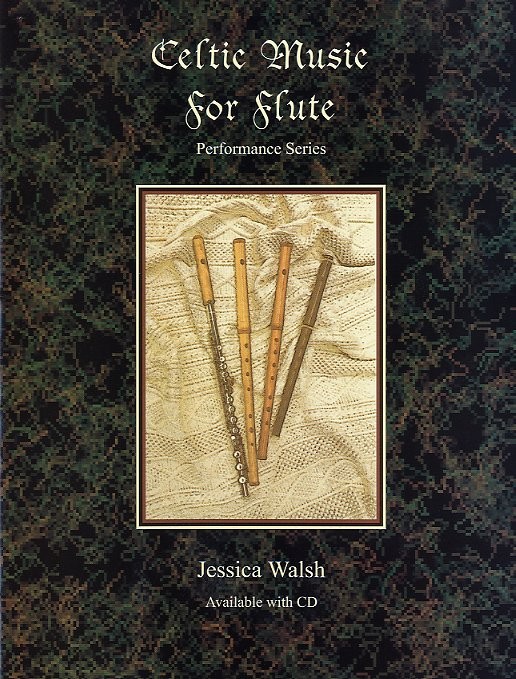 Celtic Music for Flute by Jessica Walsh contains 44 tunes for flute which can be played solo or with a chord instrument. This great collection includes tunes from Scotland, Ireland, England, Wales, and the Isle of Man. The melodies were chosen from more than four hundred years of Celtic music. Most of the pieces have been extended with variations, which make the tunes a more suitable length for performances and are a lot of fun for the flutist to play.

In addition, they will introduce the beginner to the joys of improvising in Celtic music, in which ornamenting and augmenting melodies is a tradition. Every tune in the book is included on the digitally mastered CD. Though the tunes are very effective as solo material, Jessica chose to record most of them with guitarist Allan Alexander. Allan has rendered the chords artfully, and the result is a really lovely CD which is a pleasure to listen to.

For the player who is new to Celtic music, the recording will give insights into the melodies, and it will allow the flutist who has no access to a chord instrument to hear the harmonic progressions. For those who know and love these wonderful tunes, it will be a joy to hear them played by two musicians who obviously love to play this music together.The CD which comes with the book has all 44 of the tunes in the same order in which they appear in the book.

The CD will give you insights into the music, and it will be enjoyable to listen to on its own merit.
Contents: Follow My Highland Soldier, Blythe Was the Time, Carpenter's Morris, The Gentle Maiden, O as I Was Kissed Yestreen, Arrane ny Skeddan (Song of the Herring), Song of the Falcon Chief, Hush! The Waves Are Rolling in, Hunting the Hare, Fisherman's Lilt, The Foggy Dew, The Cuckoo's Nest, I Left Him on the Mountainside, Cold and Raw, Road to Listonvarna - The Morris Dance, Silent, O Moyle , Suo Gan, Kemp's Jig, Young Catherine, My Thousand Times Beloved, Pat's Missing Finger, Lassie, Lie Near Me, Shule Agra, The Butterfly, The Swan, MacCrimmon's Lament, Come, Give Me Your Hand, Cremonea, Send ‘em Running, Carolan's Farewell, The Chase (from Into the Hills), Niel Gow's Lament for the Death of His Second Wife, The Queen's Dream, Pastheen Fionn, The Exile Song, Fear a' Bhata (the Boatmen), Parting Forever, Ye Banks and Braes of Bonnie Doon, Mary's Lament, Hush My Babe, Lie Still and Slumber, An Emigrant's Daughter, Johnny Cope, Manx Lullaby, and Blind Mary

Add to Cart
The flute magazine "Flutewise" a UK publication reviewed the book saying "It isn't very often that professional players and flute teachers rave about a book, but here is one that is proving very popular. The book contains over 40 haunting melodies that you will want to play again & again. Suitable for players of about Grade 3 (ARBSM) standard onwards."
Customer Comment About This Book:
Wow!!!! These flute and guitar books are full of gorgeous music perfectly suitable for children, teens and adult amateur flute players. They each come with a CD and has full length, spirited performances of all of the pieces, in order to match the book, that you can play along with. The composers are from traditional celtic and troupadour backgrounds and there are many many "gems". I have at least 10 students who will adore these books, the minute I play the CDs and show them the parts during their next lesson. (the technical difficulty is Conservatory grade 4 to 8. Perfect!!). I have flute students asking me for celtic works all the time, and until now only had very scant few to choose from! Plus having the guitar and flute parts on CD means it would be great for self- teaching flutists as well. What a resource!!! *Do* check them out!!!!
From: Jennifer Cluff
Principal flute: Vancouver Island SymphonyI played the flute for five years while in school, grades 5-9. I quit in the 10th grade and sold my flute. Ten years later I realize I have a strong passion to play again. Even in my dreams the desire was strong, night after night of dreaming of beautiful music played on the flute. For Christmas 2003, my husband gives me one along with a beginner book of sheet music. I could still play. The notes surprisingly were still embedded in my brain. I immediately wanted music on a more intermediate level thus ordered "Celtic Music for Flute". The point is, this book has fulfilled my desire of playing beautiful music. I highly recommend this book.
I really love this book but I enjoy Celtic Music for Flute Volume 2 even more. The second volume has a CD also but you can play along with all the songs where as in the first book she plays the songs with different types of mouth pieces which change the key. The songs are great and some even have the lyrics under them."PA
I really enjoyed reading the thorough notes included with this book and then playing all pieces, both alone and with the CD. I would recommend this book and CD to anyone interested in playing some fun Celtic music.K.K. St. Louis MO
This book is a great book of music. The CD that comes with it helps figure out the songs alot easier and is also just a great CD of flute music. The music in this book is somewhat hard (at least for me) so i would not recommend this for the begginer flute player but anyone whos played for a while. This would be a great book for you. I highly recommend it.MO
This is an excellent buy for any flute players who enjoy Celtic music. The material is challenging enough to make it interesting, but not so difficult to make it too frustrating for people who aren't all that great at reading sheet music. And the CD helps a lot if you get stuck!
As a "woman of a certain age" I have recently started playing flute after a hiatus of 30 years. I'd played during my school years and then lost interest. I was enjoying taking up the flute again, but this book lit my passion. Many of the pieces in this collection ("Hush! The Waves Go Rolling In" for instance) are easy enough to be played even by someone just transitioning into Intermediate level. Others are so haunting that they inspire you to stretch your abilities. This book also comes available with a CD of the author playing all the tunes, and I strongly recommend it. Some of the tempos are a bit tricky (although the author encourages each player to find their own rendition) and it has been a tremendous inspiration to me to hear the tunes played by such a wonderful musician. I find myself "hungry" to get to my practice each day, and this book remains my favorite.M Cambridge MA
First picked up a flute 15 months ago - hooked ever since; Jessica Walsh makes it sound so easy and fires the imagination with these lovely unusual tunes - some of which I've never heard of from Celtic parts of Britain; that lovely warm Celtic shiver that only the flute and fiddle give. Wonderfully woven variations accompany these long hidden tunes, and superb guitar accompaniment, suitable for beginners thru to, well, as accomplished as you like. A must for the desert island and something to aspire to if you've recently picked up the flute; to listen to or learn from - its a joy to possess and the best money I've spent for a long time. Highly recommended. S.M.UK