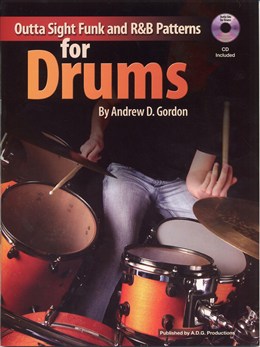 Outta Sight Funk and R&B Patterns for Drums by Andrew D. Gordon is designed to help drummers and drum programmers learn or improve their funk drum playing technique with a wide range of different Funk riffs and grooves. The book starts off with easier examples and gradually increases in difficulty as the examples become more syncopated. This book is a companion to Outts Sight Funk & R&B Riffs for Bass

While living in London during his early 20’s Andrew had the opportunity of developing his Funk & R&B skills by playing or jamming with musicians of mainly African & Jamaican descent 3 to 4 times a week. They would jam for hours on end including doing gigs to the early hours of the morning. From this experience it is his feeling that it is important to play and learn from other musicians, however, if one is unable to do so then incorporating this product into your practicing routine is the next best thing. By using this book your funk drum/drum programming skills will definitely improve.

What is Funk Music

Funk is an Afro American musical style originated by James Brown and later Sly and the Family Stone emphasizing the rhythm and putting melody and harmony in the background. Funk often consists of a complex or syncopated grooves where every instrument is playing a different rhythmic part fitting together like a jigsaw puzzle. Entire songs are written without any or minimal chord changes where one or two riffs form the basis of the song. Tempos for Funk music range between 80 bpm to 125 bpm.

Also available are play–a-long rhythm tracks of all the 55 examples as mp3 files. These mp3 files are around 2 minutes long and contain the rhythm section of keyboards, guitar and bass as well as a click track so that you, the drummer, can practice in a band like situation.
Add to Cart